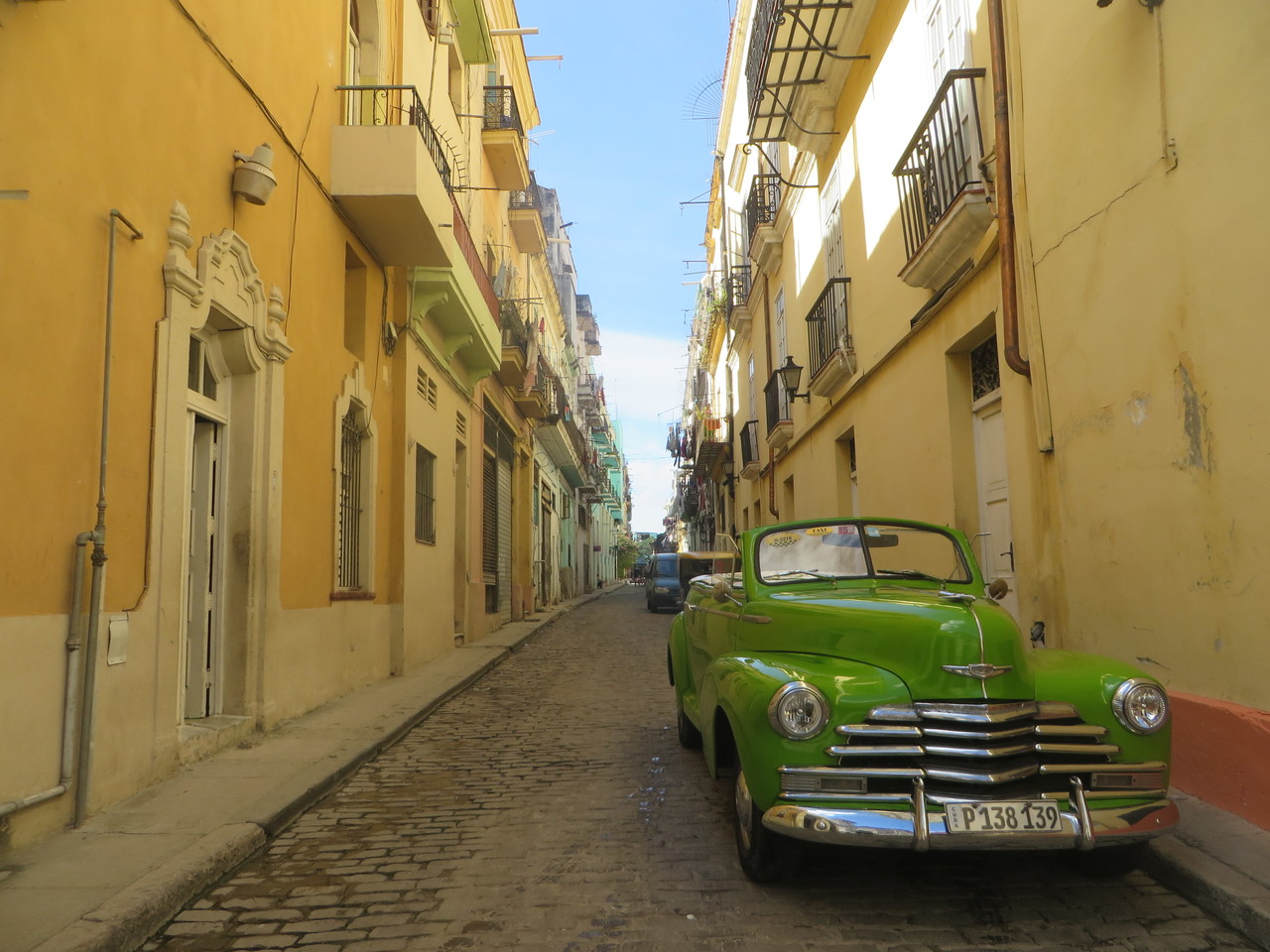 That is La Plaza de Revolution and that is Jose Marti. As the cab driver gestured for me to look out of the window I found myself staring at a statue of his likeness followed by images of Che Guevara and Cinefuegos, whom I initially thought was Castro. After that moment, I finally realized that I was in Cuba.

As my taxi makes its way through Centro Habana, being here begins to overwhelm me. The bold colors of the Cuban style houses, the people, and sounds prompted me to react by grabbing my camera and taking photos of everything. As locals live their lives, other tourists looked as awestruck while trying to immerse themselves in the scenery and not knowing where to begin. The homes, simple and grand, are bought with money sent from abroad by relatives. Additional rooms are either used as a hostel or made into cheap apartments for four or more people. 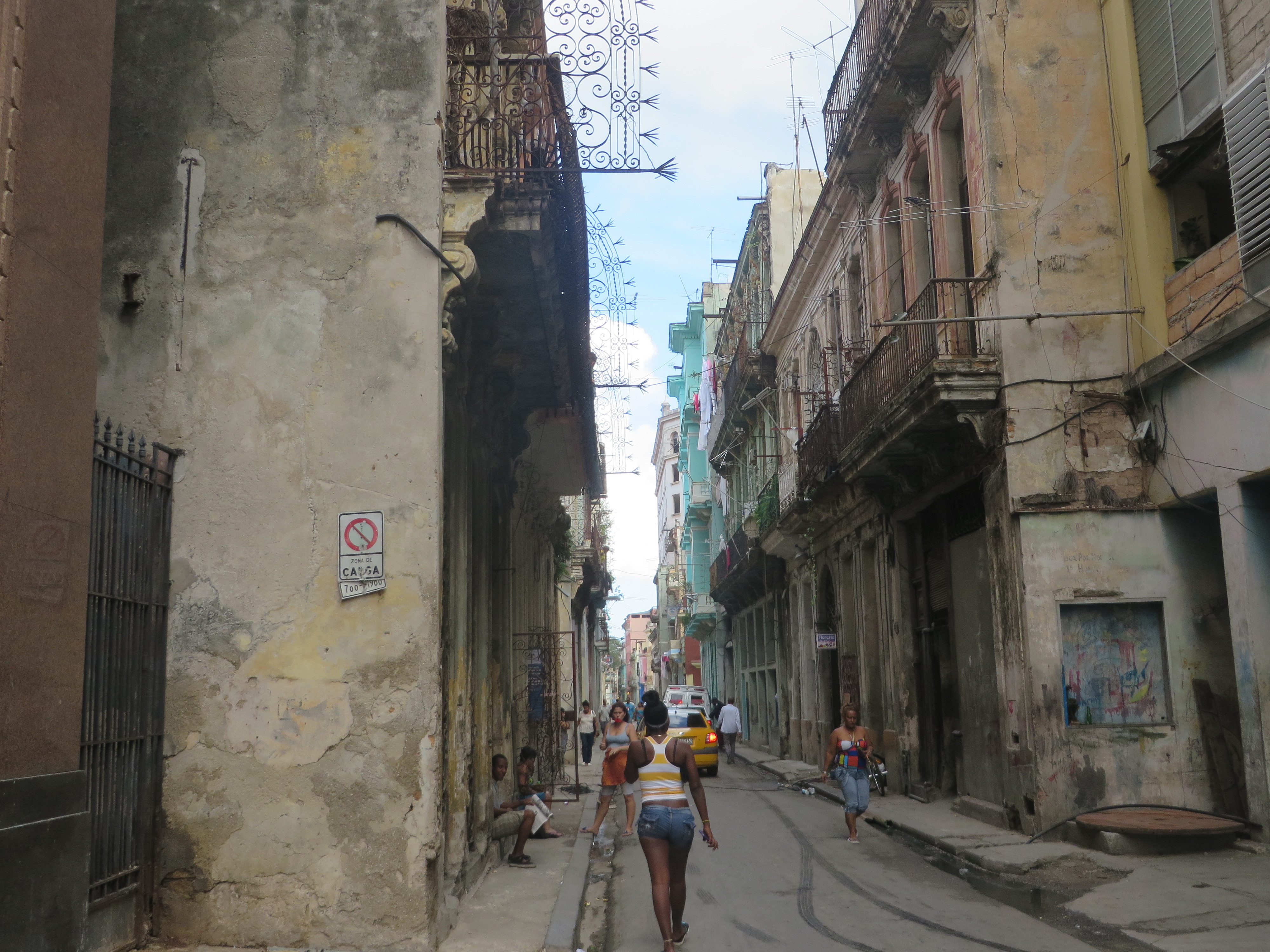 Habana Vieja is the most beautifully tragic place I have ever seen. The fading colors are like dangling masks allowing you to see the neglect of age and inability to repair underneath. Abandoned buildings are used by either squatters or people selling necessities such as milk and meat. The nicer buildings sell tourist wares such as paintings, cigars, and jewelry. The streets are crowded with tourists, locals, and horse drawn carriages, and taxis move over cobblestone and partially tarred streets.

In the more touristy areas, workers try to lure me into various historic landmarks while vacationers imagine themselves as gangsters or movie stars of old while smoking Fidel's favorite cigar during the Revolution, Cohibas. The scene is almost perfect with plates of food shared between friends either at Hemingway's old stomping grounds or Plaza Vieja, all washed down with Cuban Rum or Mojitos as the sun dances overhead and brings a different vibe to the area.

I spend days exploring La Habana to the extent that I can walk its streets only getting mildly lost but quickly finding my way to my destination. Locals randomly approach asking questions, to say hello, or simply point you in the right direction while being curious to know what you're doing or trying to showcase their pride in their country. In the background, I hear, "I LOVE AMERICA, WELCOME TO CUBA” as I walk past, much to the ire of Europeans. Some locals approach promising they have no ulterior motive other to get to know you and practice their English, but your instincts tell you otherwise. 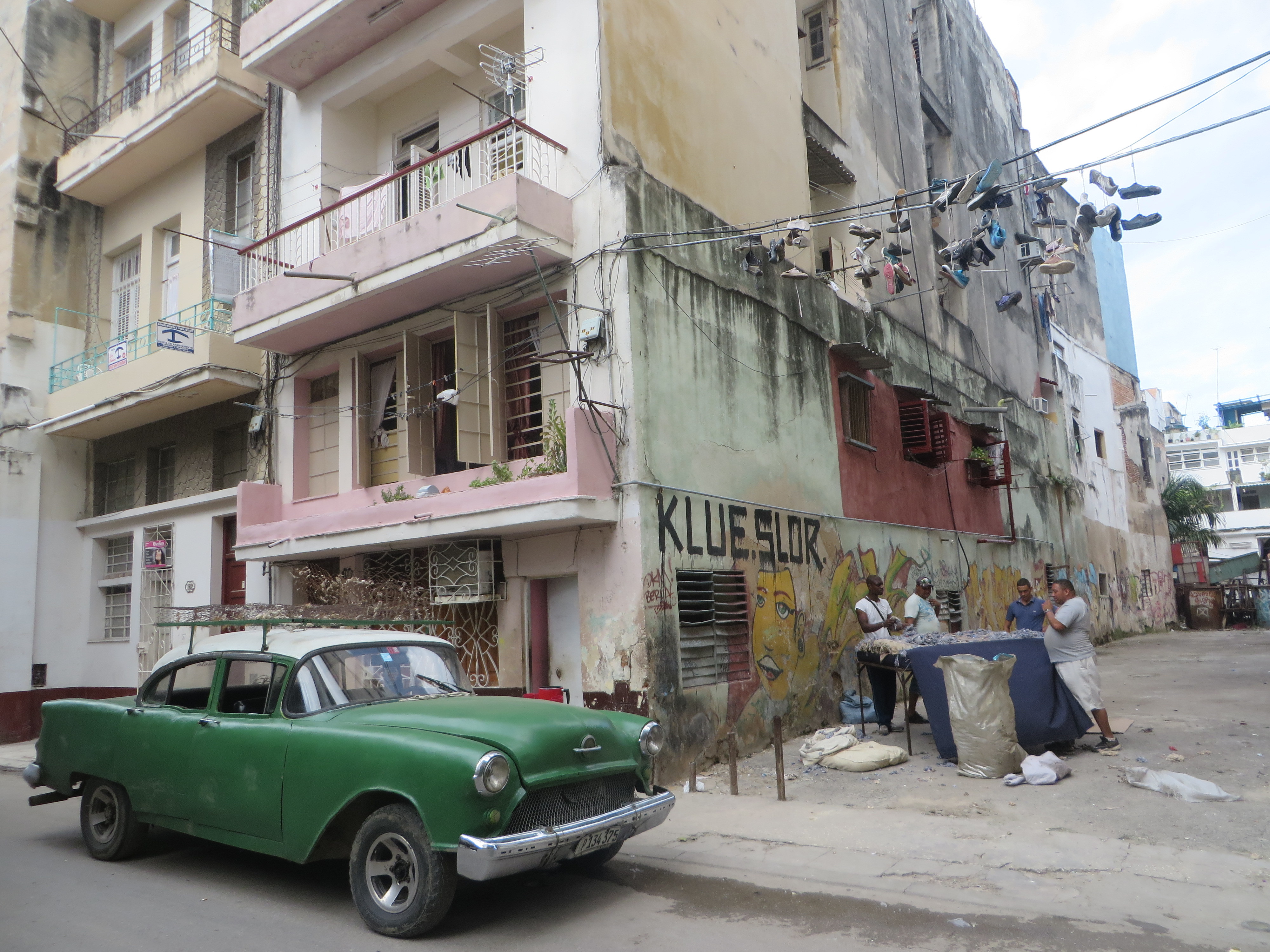 At night, I always go to the seawall, the Malecon, the place everyone goes to meet and drink. My choice spot is across from the La Abdin restaurant where I often eat dinner and watch the cruise ships go by the light house as the sun sets. Every night there is always a conversation to be had and I look forward to each one while sharing a beer, talking politics, and getting suggestions as to places to visit such as the Callejon de Hammel on Sunday for Afro Cuban prayer and dance, where to get the best souvenirs, how to get cheap dentistry, and what it means to be Cuban. 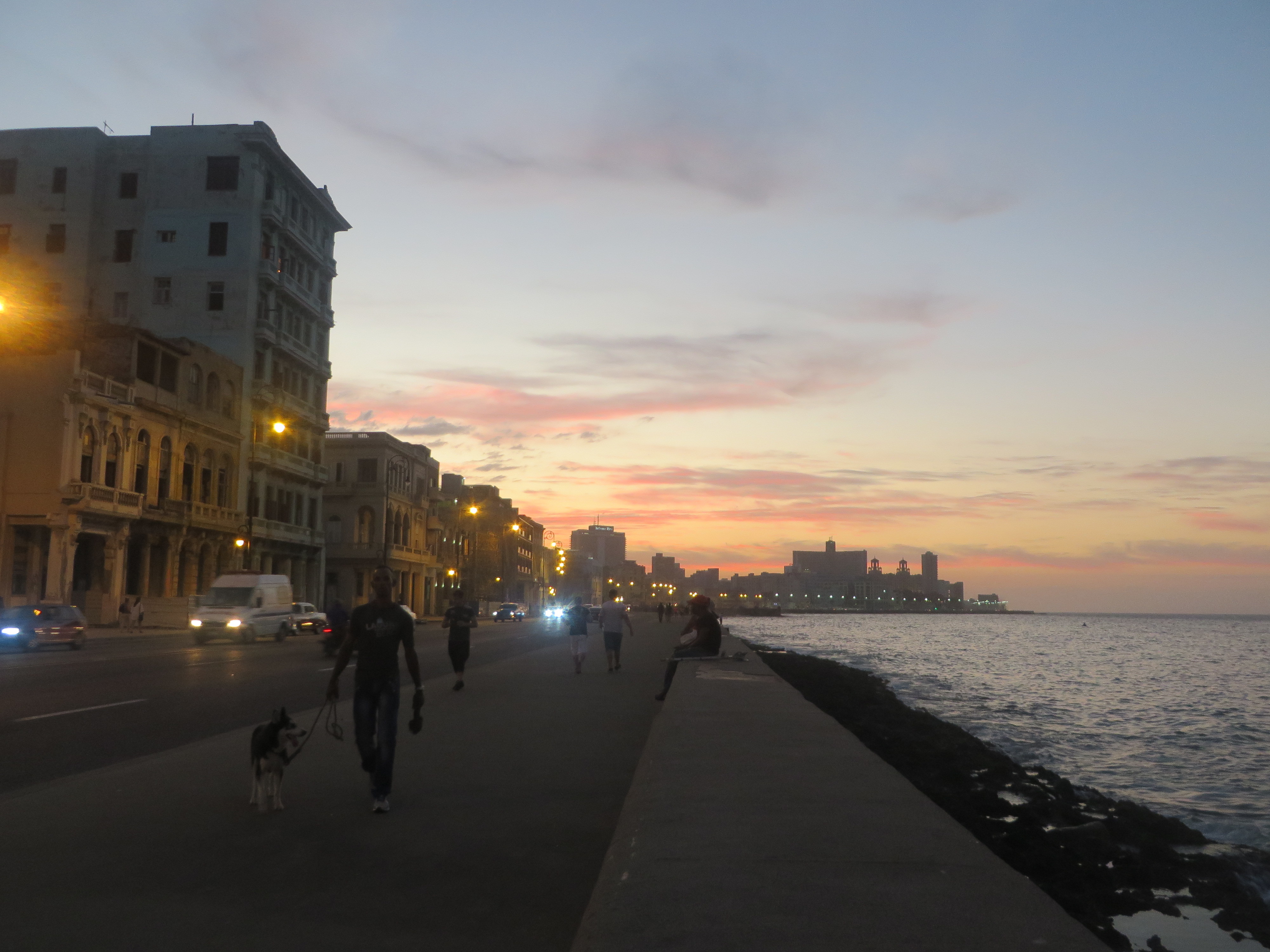 As I sit on the wall the waves crash behind me. A few pieces of disregarded trash sit nestled between the mostly jagged rocks forming a buffer between the wall and the sea. They become make shift trash cans since none are to be found near the wall or Habana Vieja but most areas, outside of Central Habana are almost spotless as if an invisible maid is cleaning up after everyone.

There are pescadores (fishermen) hoping to catch dinner, while teenagers climb down to catch fish with nets as friends wait above to lend a helping hand or laugh at their sometimes futile attempt to catch anything. All of them gleefully choose to ignore the signs stating that fishing and swimming are not allowed. 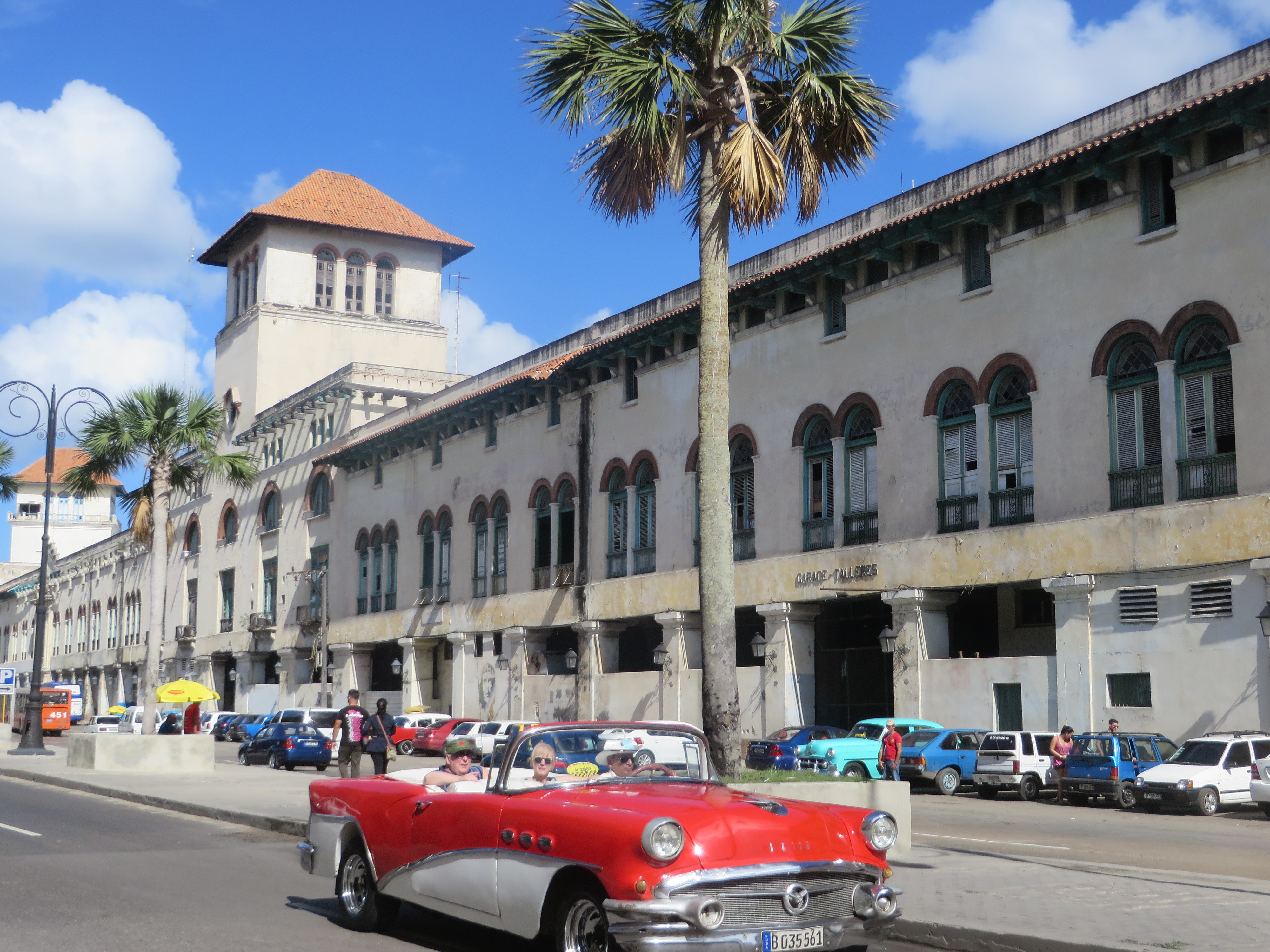 Tourists enjoy themselves by hiring taxi drivers who motor down the main causeway in vintage 1950s cars as they yell and carry on in the back seat as the drivers spur them on by honking at other drivers and they return the gesture in kind. Other tourists walk or sit along the wall propositioned by either vendors, prostitutes, or both, selling anything from chicarronitas, weed, knock off toys, or beer, but curiosity often gets the better of them and soon leads to conversations about the differences and similarities between our countries.“WE CALL IT THE BLOQUEDO” is what one person told me,“THAT IS WHAT YOU CALL THE EMBARGO.”

My last evening was spent with one last walk around El Capitolo, Hotel Ingalterra, and Central Park. Watching the taxi drivers doing checks on their cars as the sun sets, I make my way towards the seawall and promise myself that I will come back soon because as much as I've seen in my week here,  I felt that outside of La Habana holds more for me. 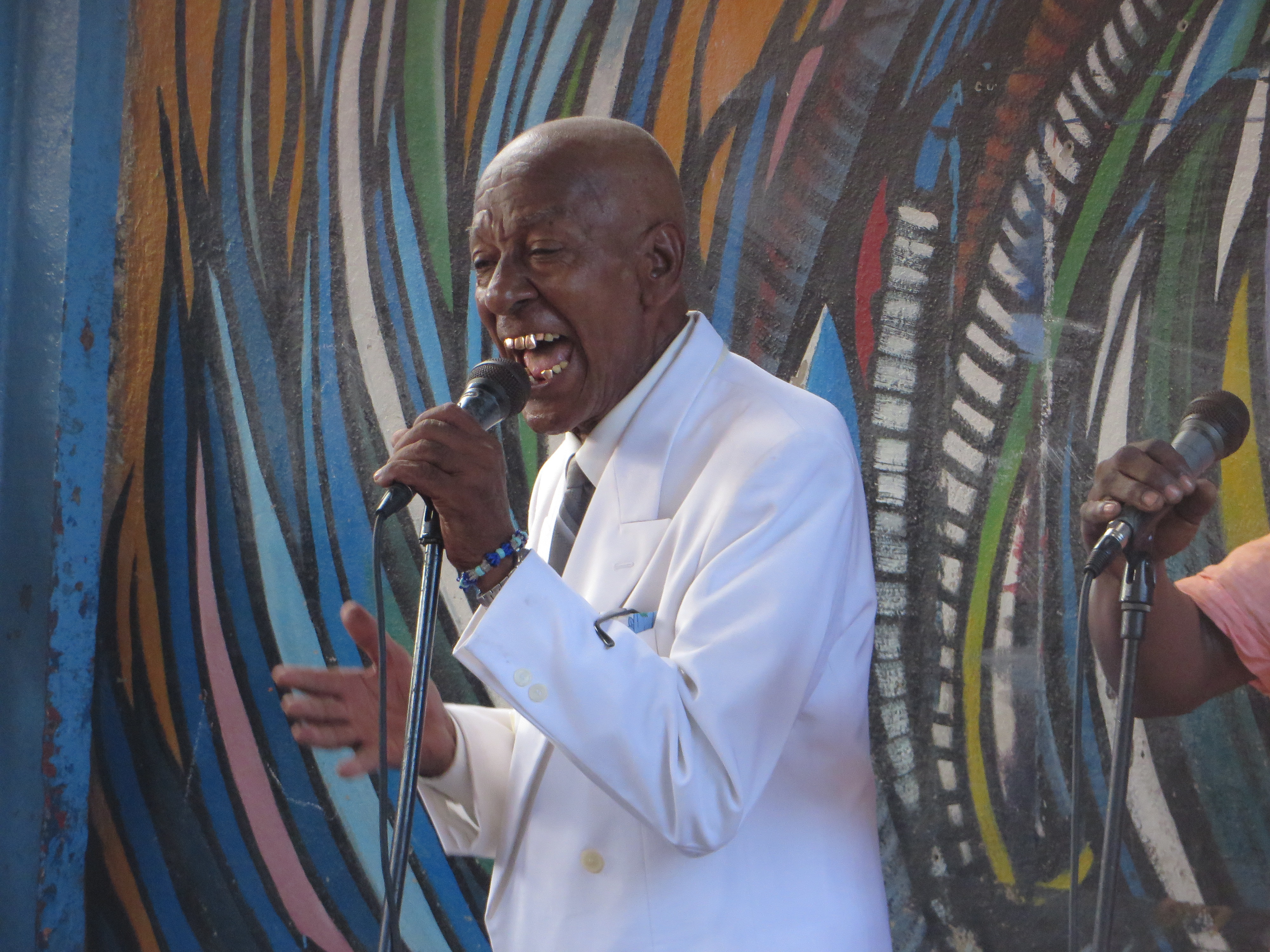 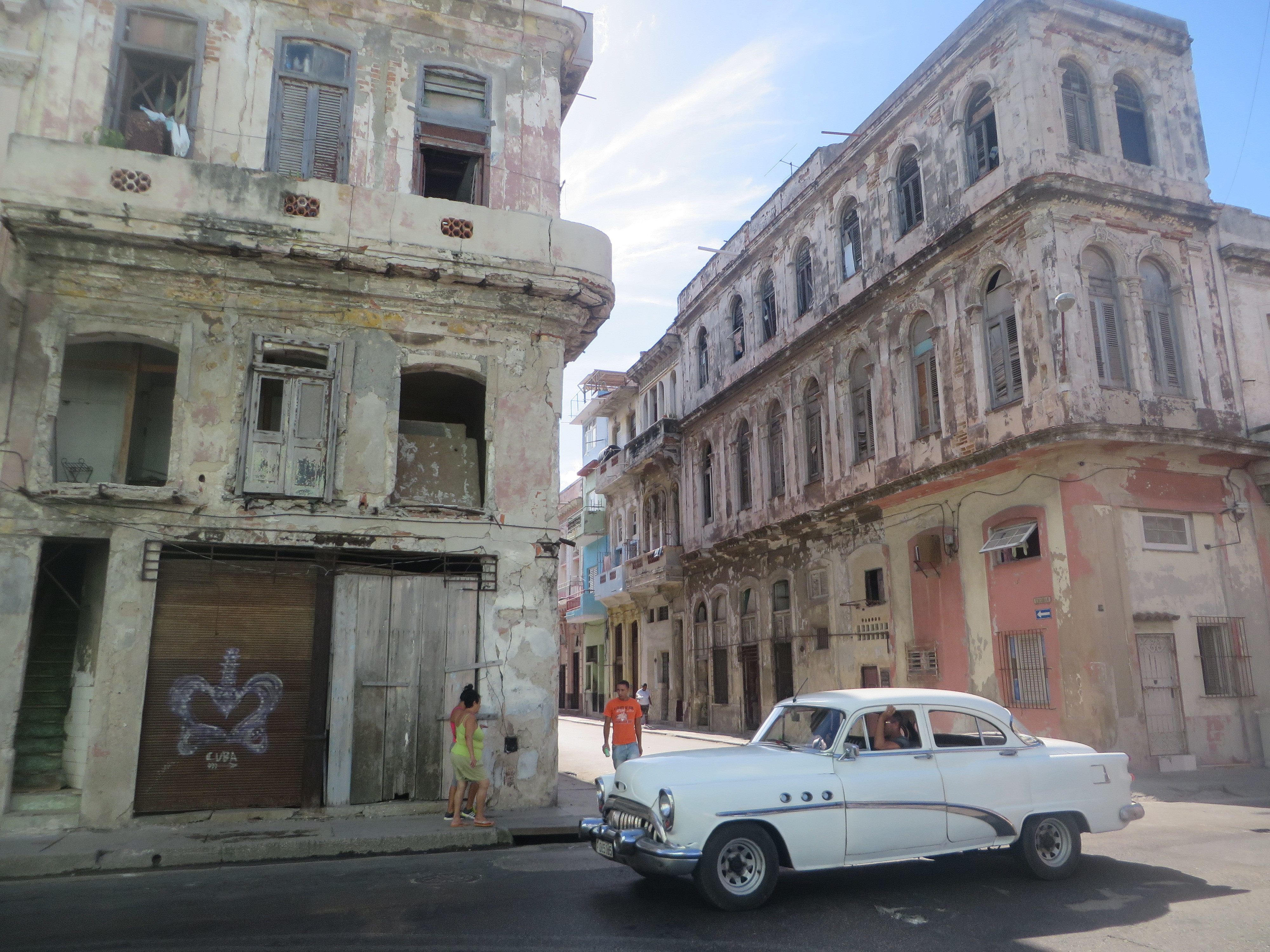 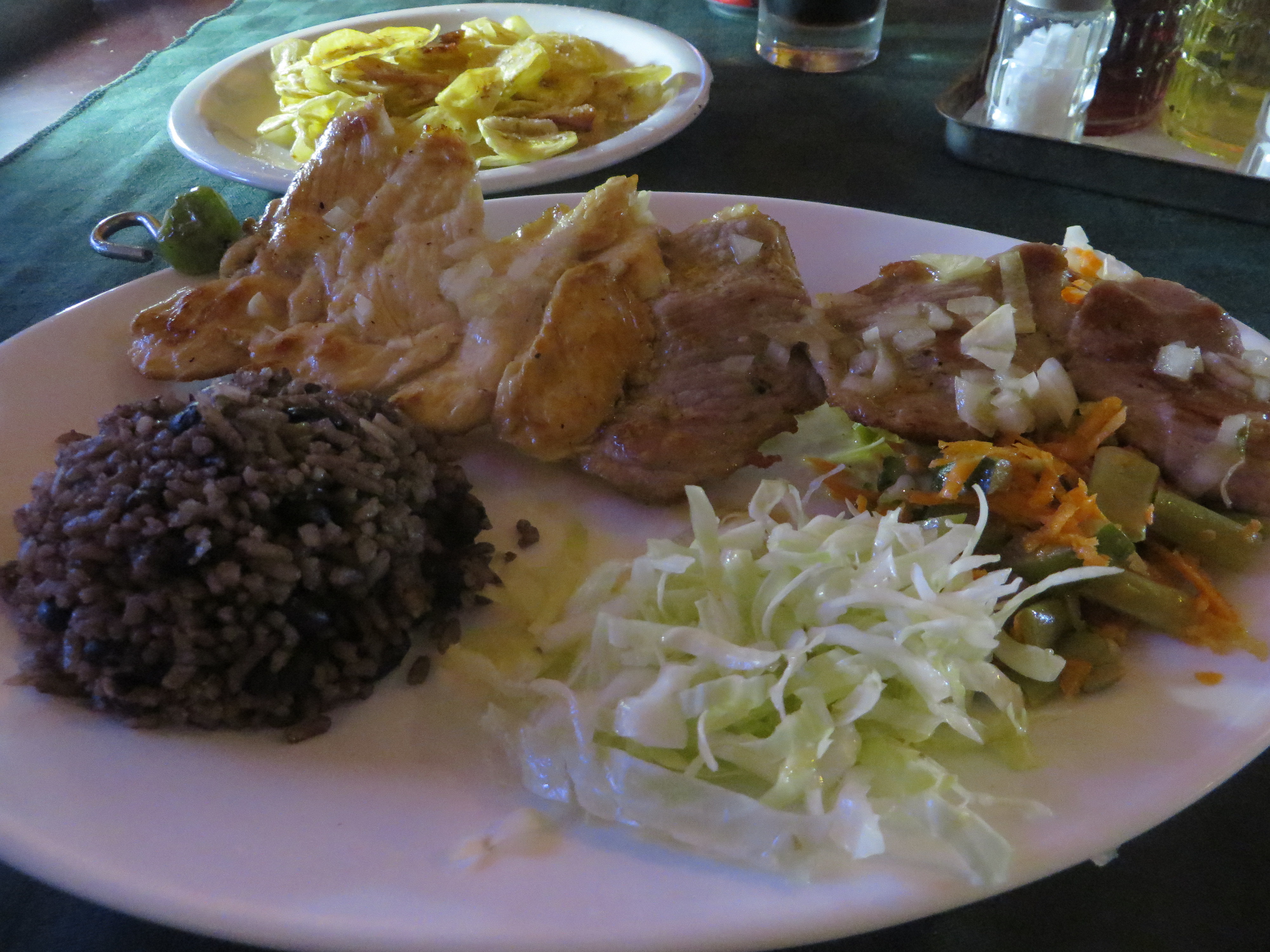 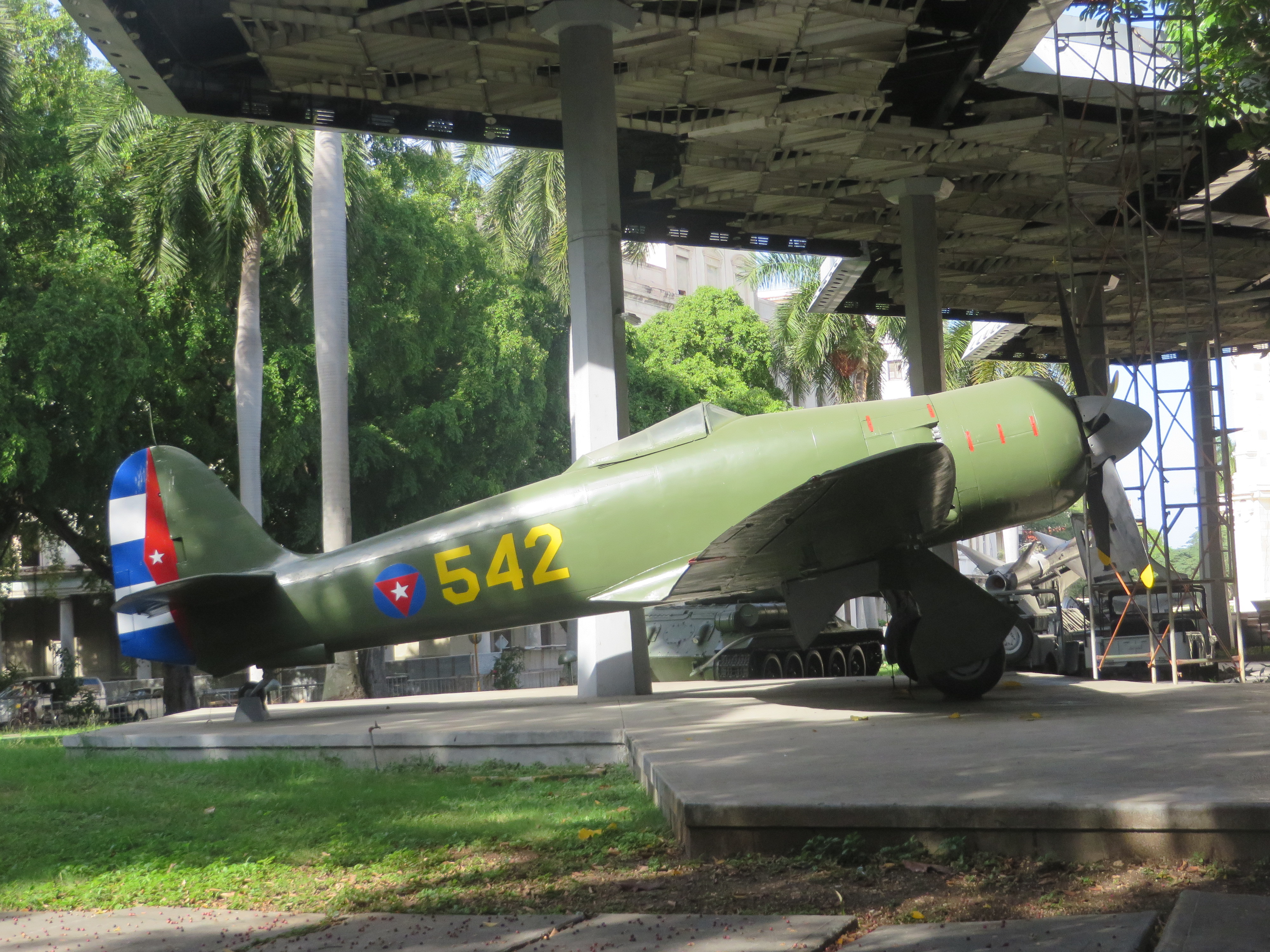 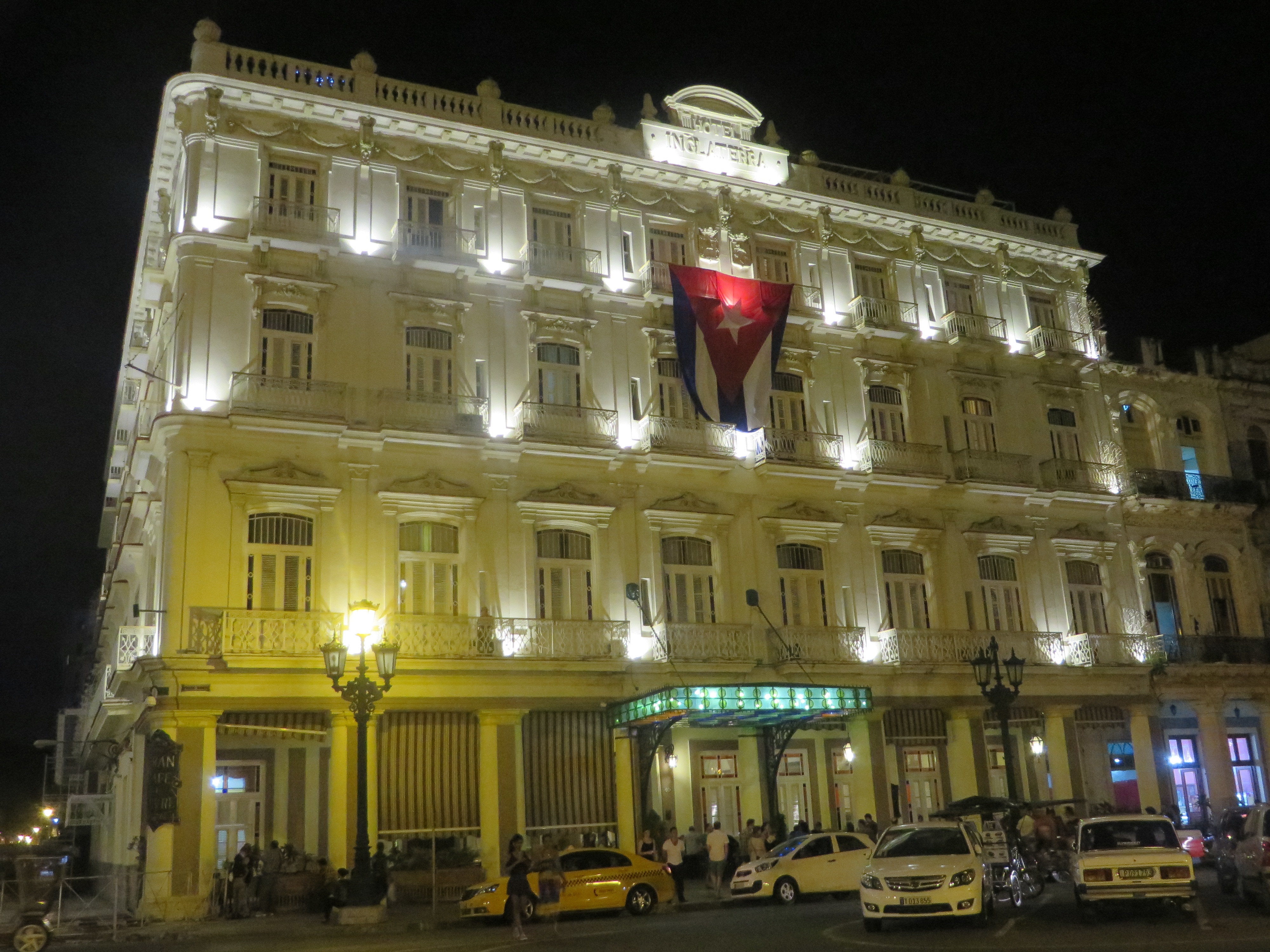 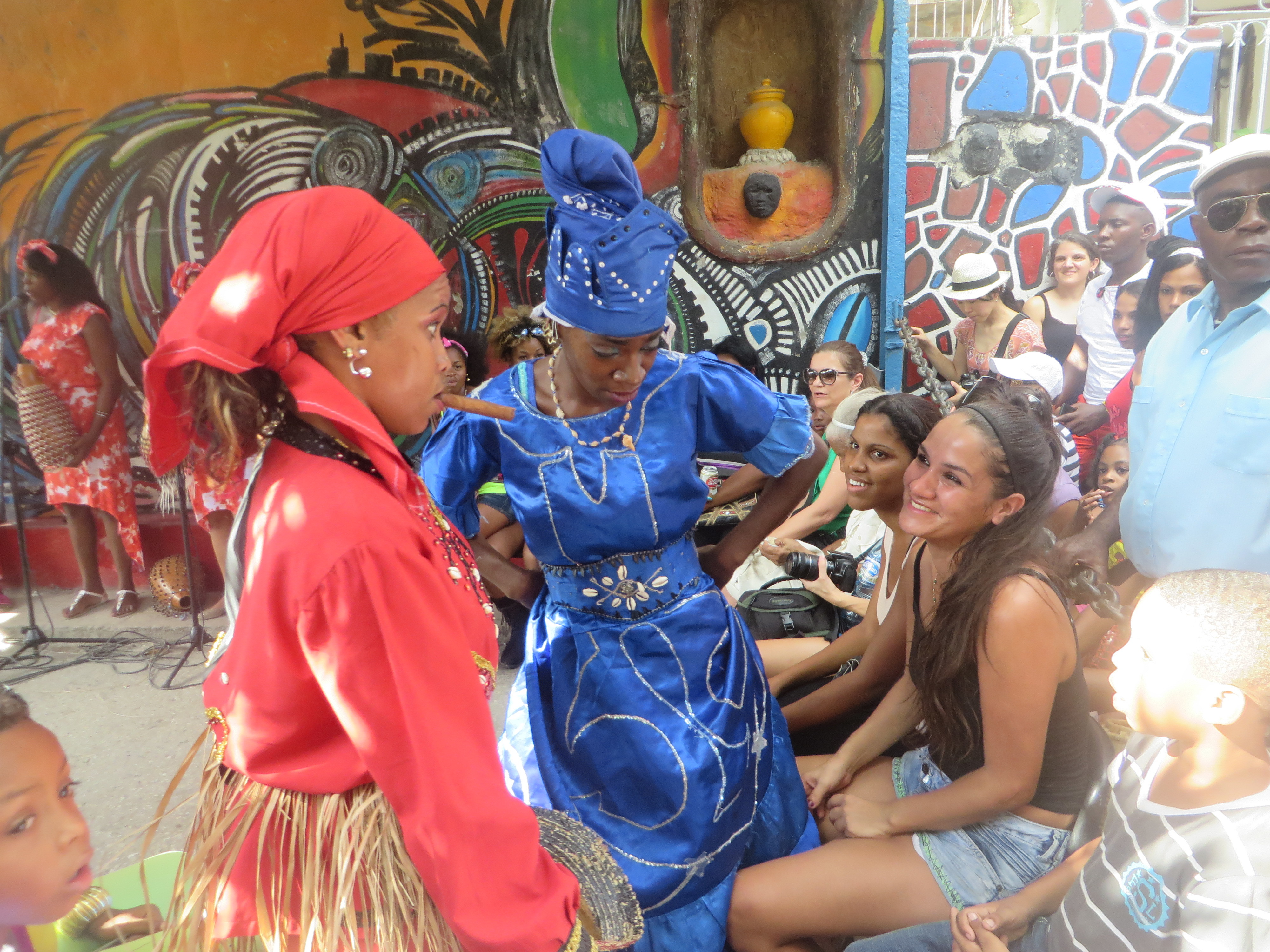 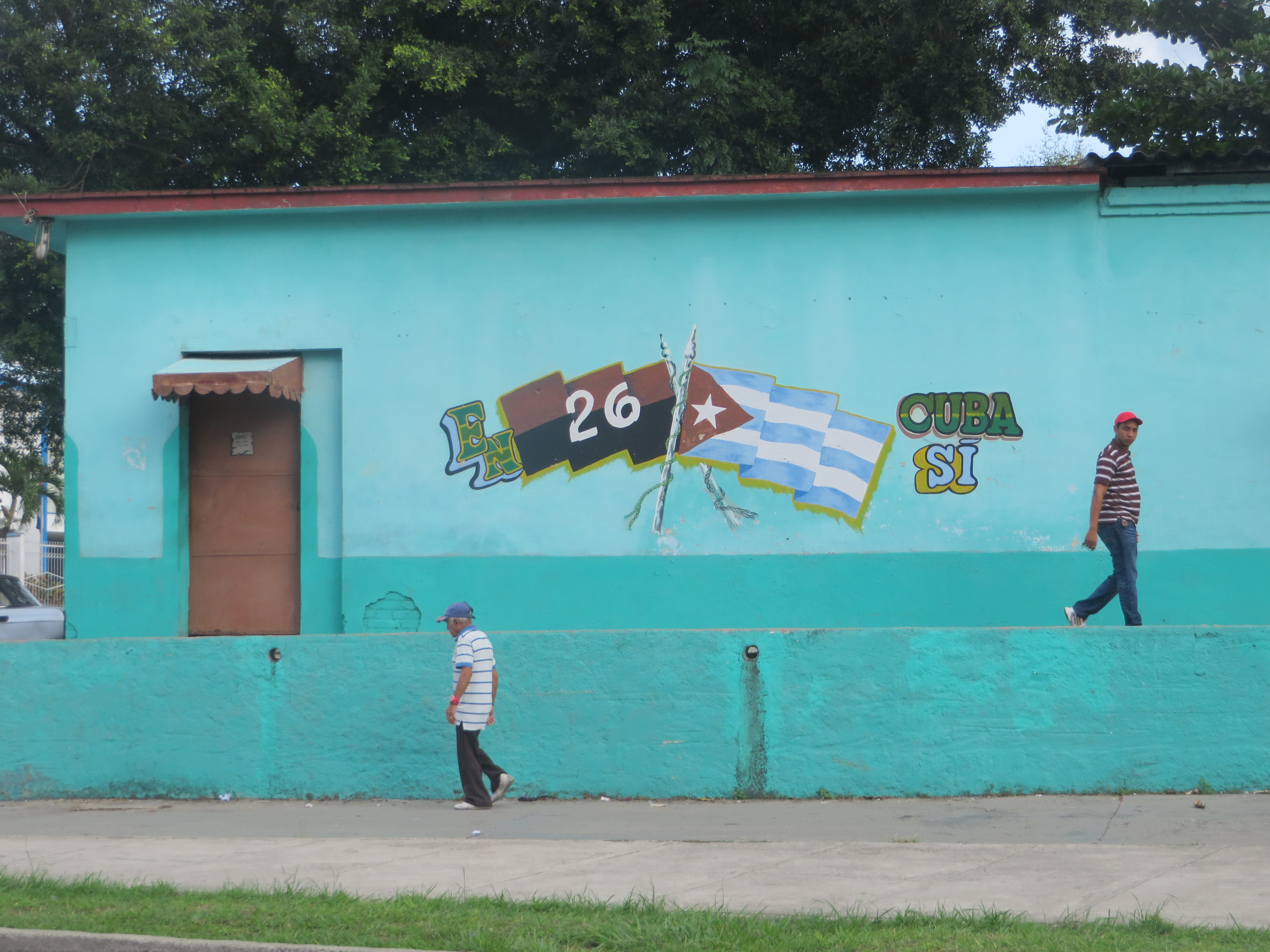